Return of the Tiger

Some years ago I built a roughly 1/6th scale Tiger tank. The correct name is "Panzerkampfwagen VI Tiger I Ausf. E (SdKfz 181)", but for reasons that are obvious, I'll just refer to it as the "Tiger". 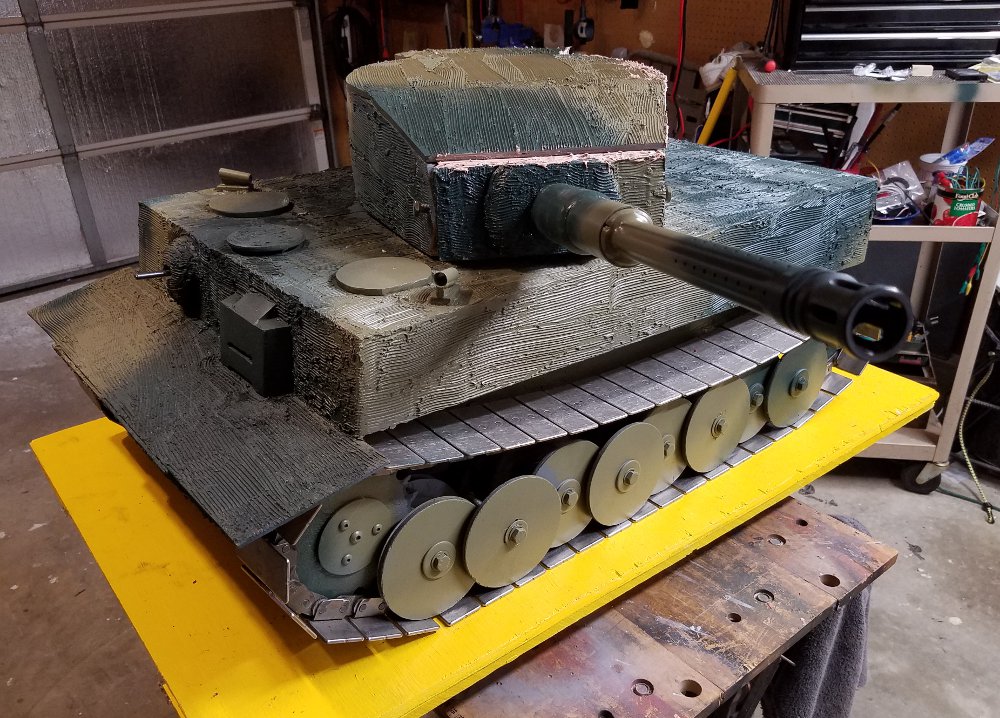 My Tiger was for the most part made out of plywood, had a functioning main gun (paint ball), a rotating turrent, the ability to elevate or depress the main gun and would do just about everything that a scale model remote control tank should do, except move very well. It was a good day when I could get it to go 100 feet without the running gear breaking down.

The core problem was the tracks. On the original model, I used stainless steel "roller chain". Stainless steel has its advantages, but the tracks were far too heavy and difficult to keep in alignment with wooden road wheels. I then tried stainless steel road wheels, but these added so much weight that trying to jam sufficiently powerful motors and batteries into the hull wasn't going to happen. I ended up abandoning the project for the time, thinking I might try it again some day. I saved the turrent/main gun assembly and sold the balance of the parts. I burned the hull thinking it deserved a viking funeral of some sort.

Below is a view of the original model looking from the rear. The big tank in the middle holds compressed air to fire the main gun. Towards the bottom is the motor(s) controller and near the front are the drive motors. 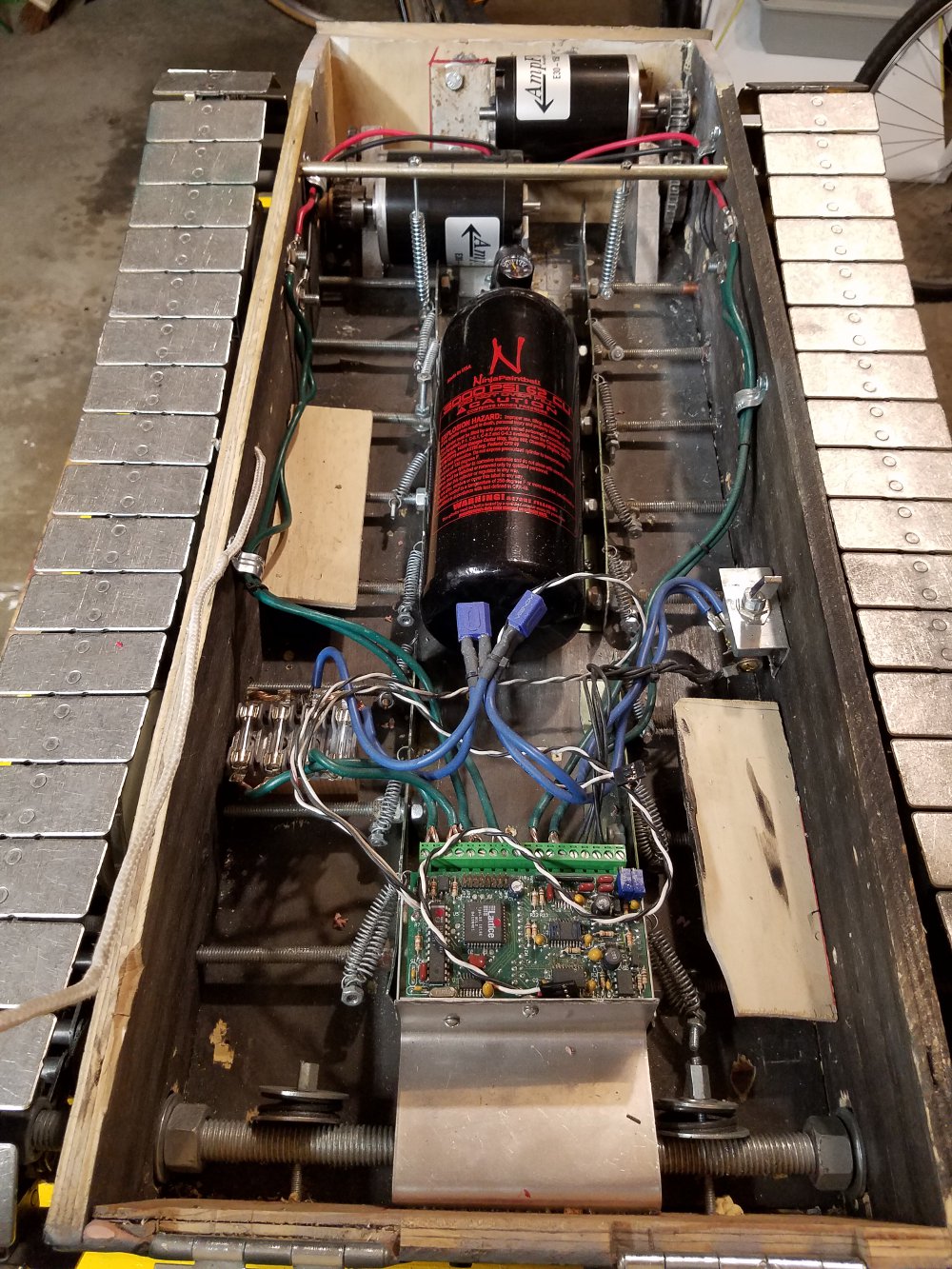 Times have changed, and with new technology comes new opportunities. The advent of an affordable 3D printer makes this project much more practical. I can make tracks and road wheels and even drive gears out of strong (and very light) plastic instead of steel or cast aluminum. And while aluminum MIG welding isn't exactly new, the price of a welder capable of welding aluminum is now quite affordable. The "new" Tiger will have a welded all-aluminum hull with 3D printed tracks, road wheels and drive sprockets reducing the weight dramatically. Less weight means I can use smaller and lighter motors and batteries...at least that's the plan.

Today, October 22 2019, marked the first official day of construction. Efforts today were devoted to cutting the lower hull parts out of 11 gauge sheet aluminum. As in the real full-sized tank, I may need to weld in stiffeners, but that will be easy to do. I completed cutting all of the lower hull superstructure parts out. I also cut the hull sides, but they didn't make it into the picture.

Note that I confused my left and right when labeling the hull floor. No wonder the first one didn't work right :-)

I completed cutting all of the lower hull superstructure parts out. I also cut the hull sides, but they didn't make it into the picture.

Today is devoted to working out details of the road wheels, swing arms and attaching the axils to the hull.

This is version 2 of a road wheel assembly. The purpose of the white space is to keep the wheels parallel. These spacers are too large in diameter since the road wheels overlap but they work for prototyping. Each wheel has a bearing seated at its center so the wheels have a very smooth rolling motion. The bronze bushing at the lower right maintains space between the swing arm (the piece hanging down off the busing) and the inner wheel. The axle extending to the left of the wheel will be cut off and a cap will be welded to it so the wheel assembly cant travel horizontally across the axle Below the wheel assembly can be seen a few sections of the track.

The other project today is experimenting with getting the axle through the hull. Welding bronze to aluminum isn't doable (at least I can't do it) so I've come up with a "clamping" arrangement. Another bushing will fit into a recessed hole in the side of the hole, and a "clamping plate" will be fitted on the other side of the bushing, inside the hole. The three smaller holes are threaded, so its just a matter of drilling three similar holes in the hull, running screws through them and tightening them so they clamp the busing into position. I've cut slots on the end of the bushing to encourage it to grab the hull and not turn, but it doesn't really matter much if the bushing turns or not since the only goal is to keep the axle in alignment. 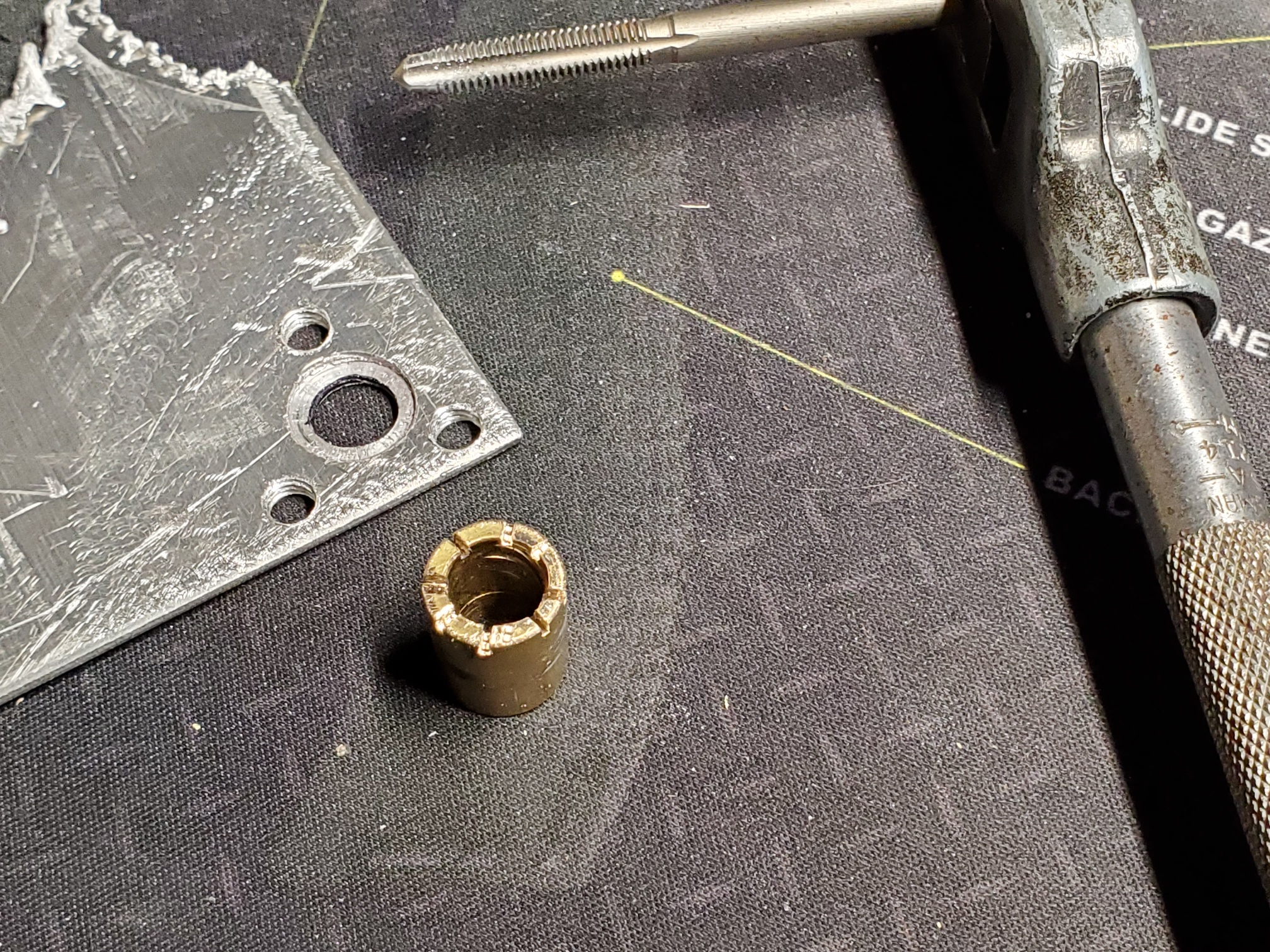 Below is an exploded view of the wheel and swing arm assembly experiment. The jagged piece of metal is part of the bushing capture assembly, I've just not cut it off square. Towards the bottom can be seen the end of the axle and the beginning of the suspension torsion bar. The real Tiger had a torsion bar suspension, and so will mine. My torsion bars are music wire. 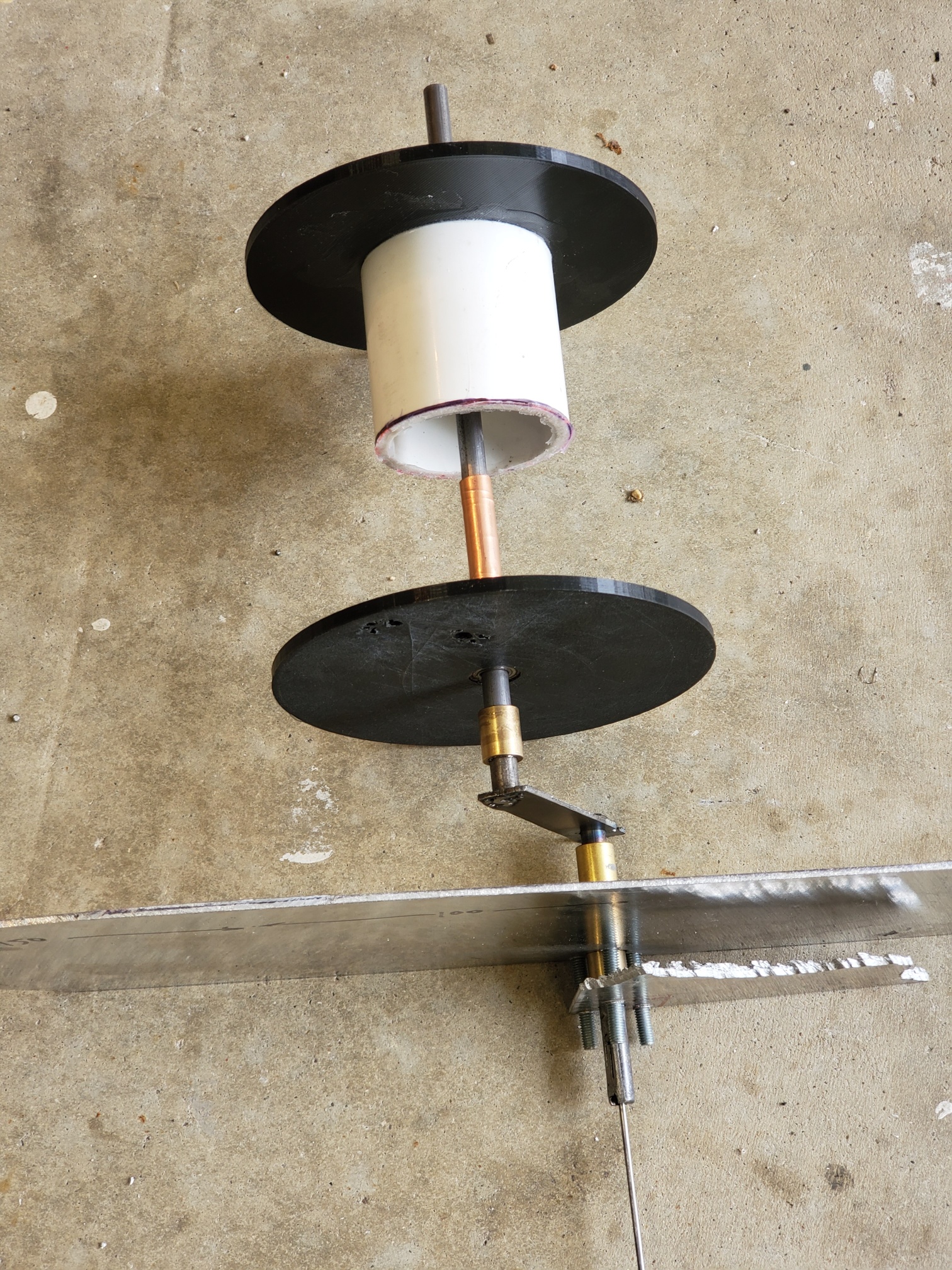 Same as above, just more vertical. 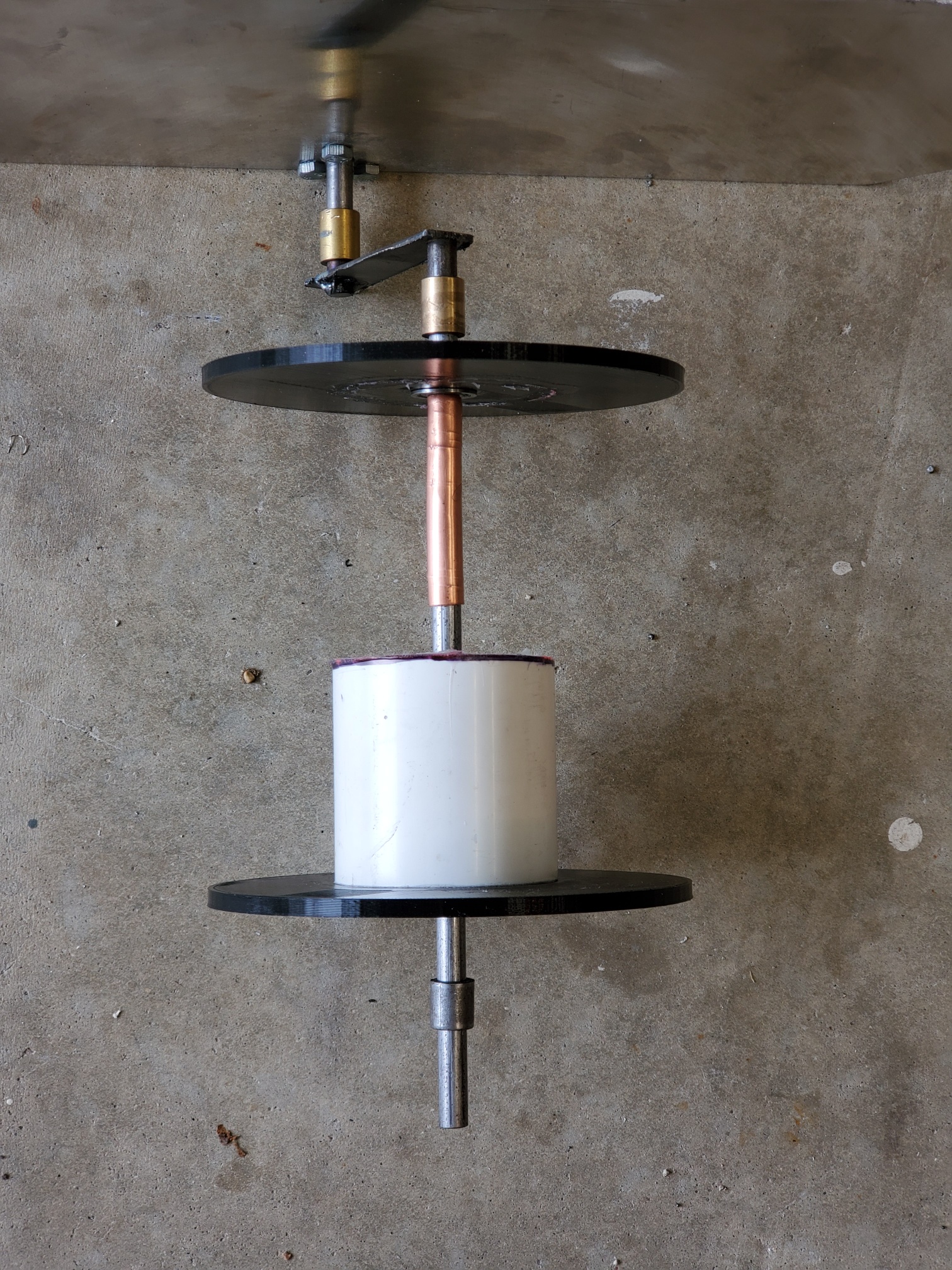 How it will look when assembled. The sleeve in the above photos, and just visible on the far left of this photo, will be welded to the axle and the excess axle length cut off. 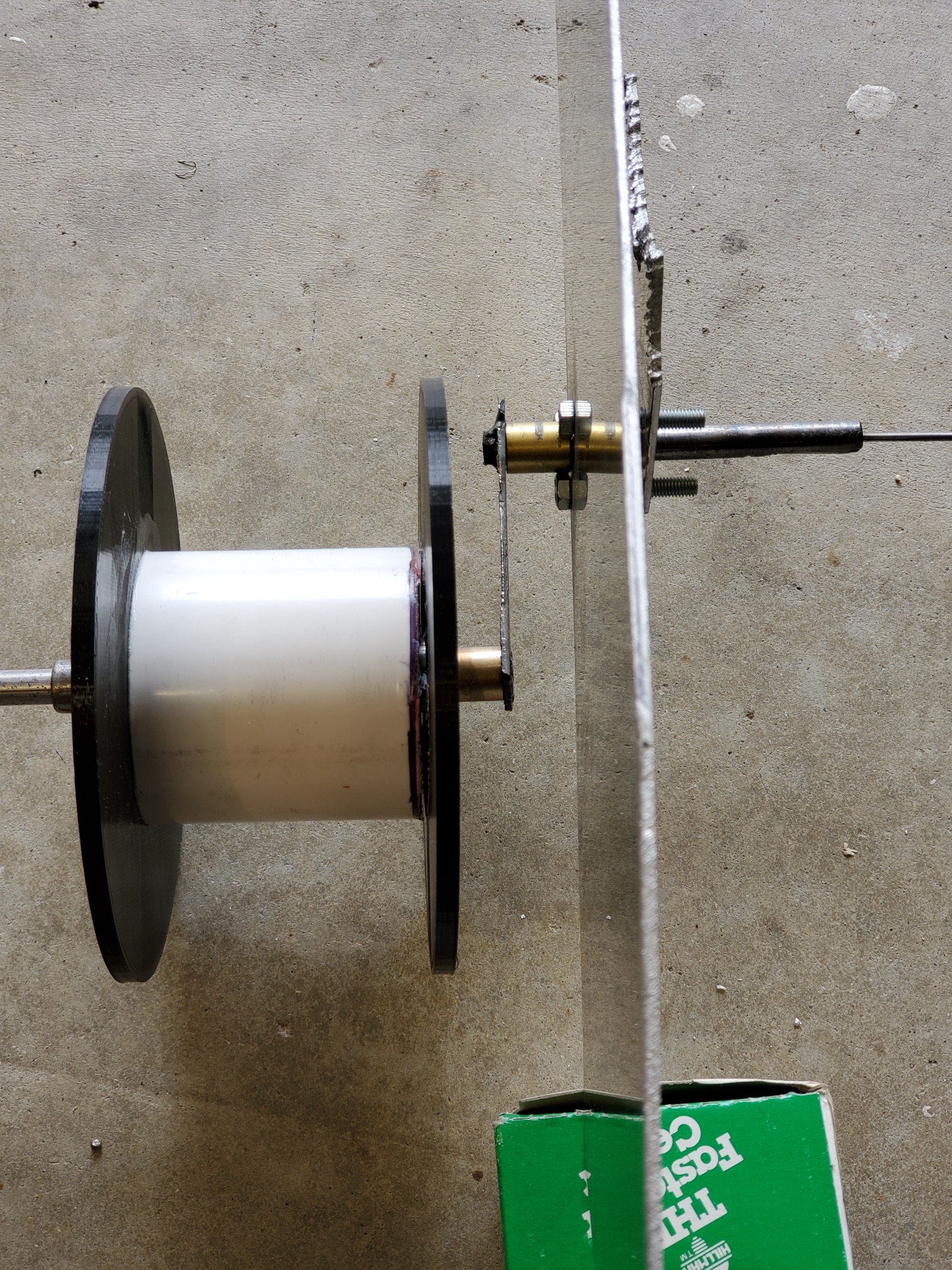 Assembly of axles, swing arms, and hull pass-through's for the torsion bars. 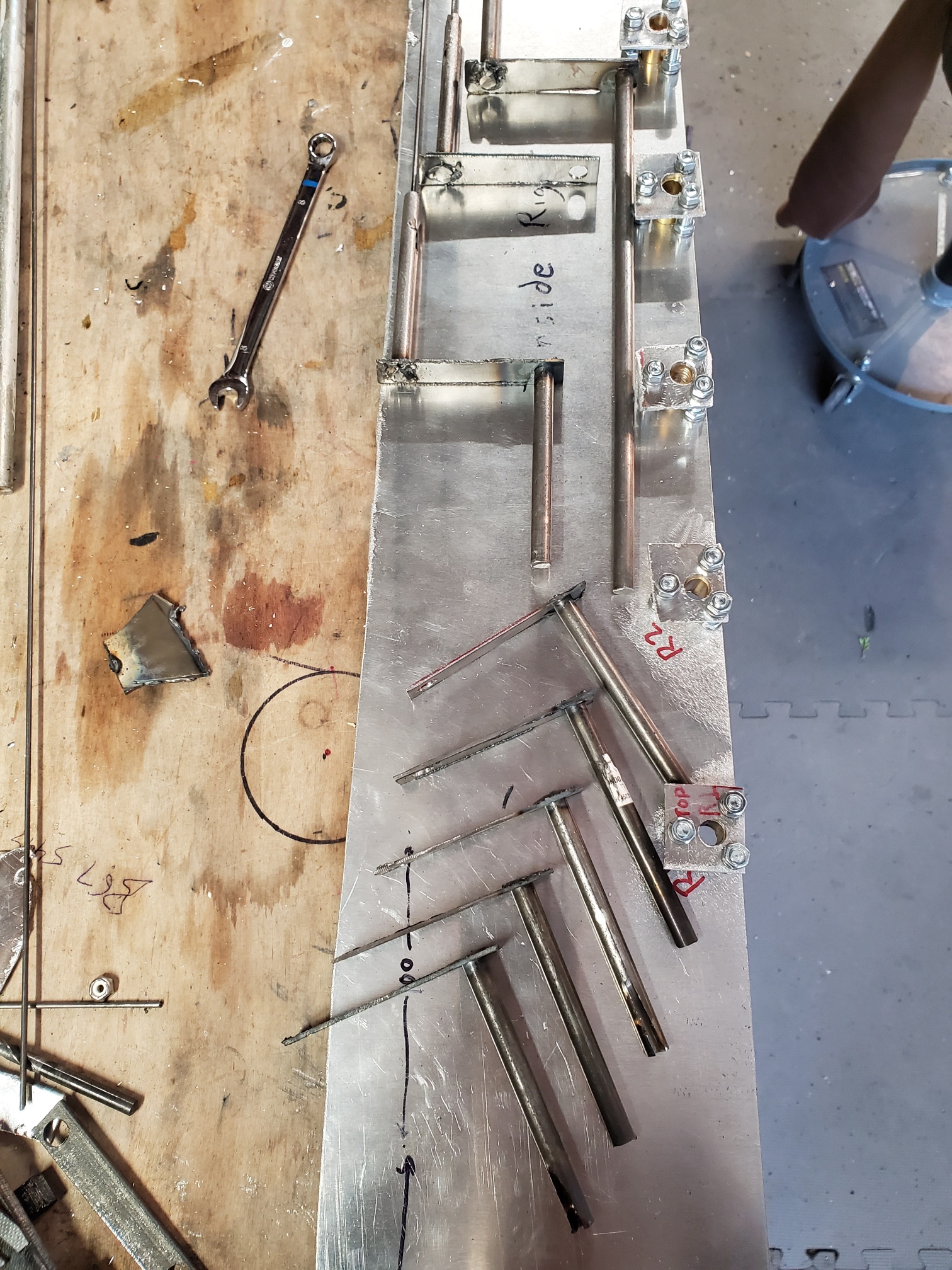 Road Wheel production. The improved road wheel has a smaller diameter spacer than shown above. In my design of these I'm being somewhat un-true to the real thing. Early production Tiger I's had 48 road wheels! Mid-production Tigers had 32, the other 16 were considered unnecessary. Mine will have 32 initially, but if I'm struck by "scale-phobia" I may up that to 48. The copper axle spacer has been eliminated as unnecessary.

In this photo, one "set" of wheels is in the vice where they are cemented to the spacer. In the background are (L to R), a completed road wheel set, a can with wheel bearings soaking in oil, and road wheel blanks waiting for assembly. 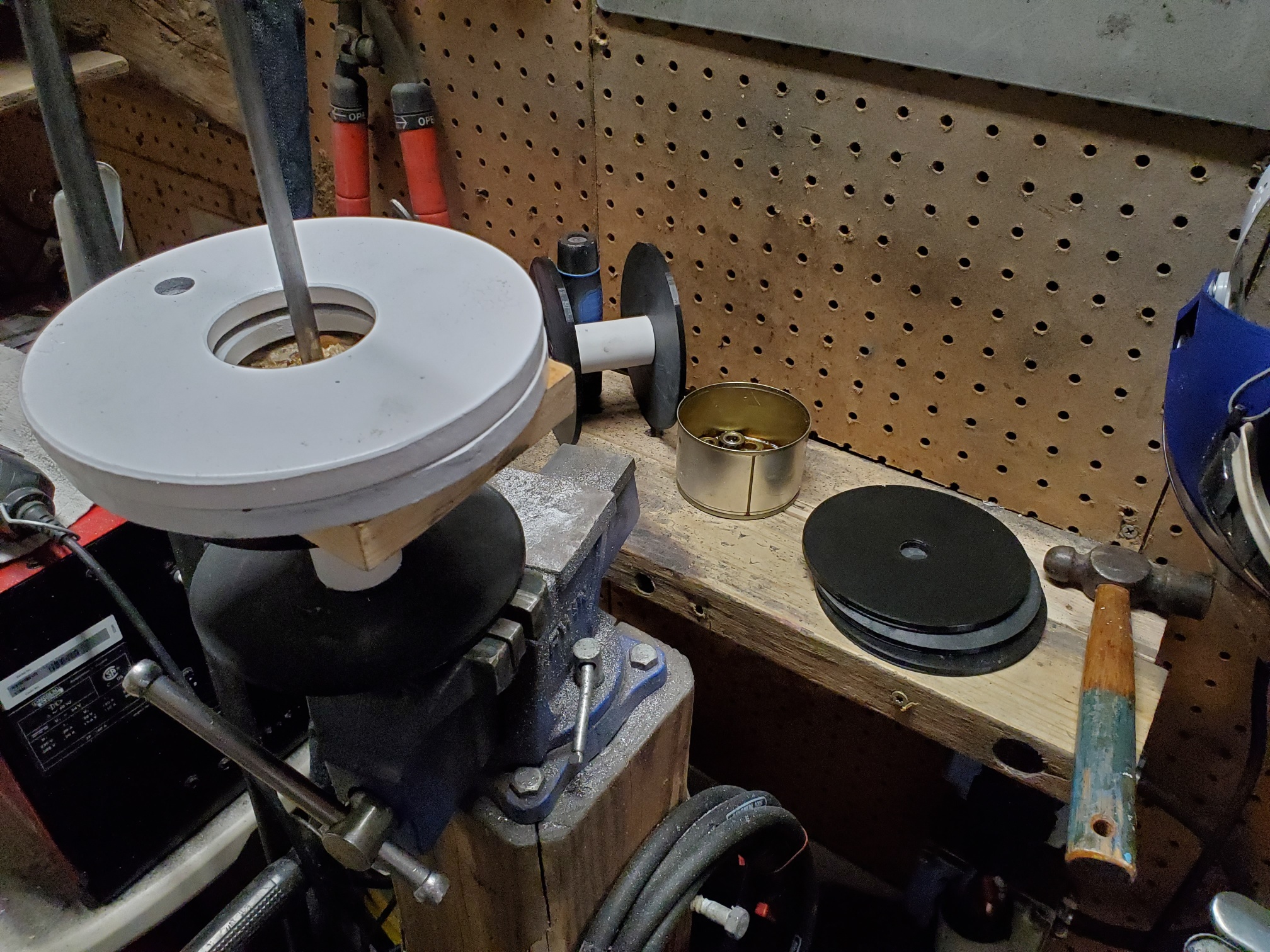 Track assembly. Each track is pinned to adjacent tracks by one bolt, one nut, and four washers. Connecting nearly 100 tracks is not very mentally stimulating work, so it's spread out over many days.

The real Tiger Tank had two sets of tracks, the narrow "transport tracks" and the wider "combat tracks". The transport tracks were 21 inches wide, the combat tracks were 29 inches wide. Why two sets of tracks??? The tanks were hauled from the factory at Kassell, Germany (near the center of the country) to various distribution point on flatbed railroad cars, and it is said that the German railway system could not accommodate the width of the vehicle with the wider combat tracks installed. However, there are many photos of Tigers being transported with combat tracks installed. Possibly some railroad routes had severe width restrictions. In any case each Tiger was equipped with the two sets of tracks when they left the factory.

To save on materials, the tracks I am making are scaled to the width of transport tracks. 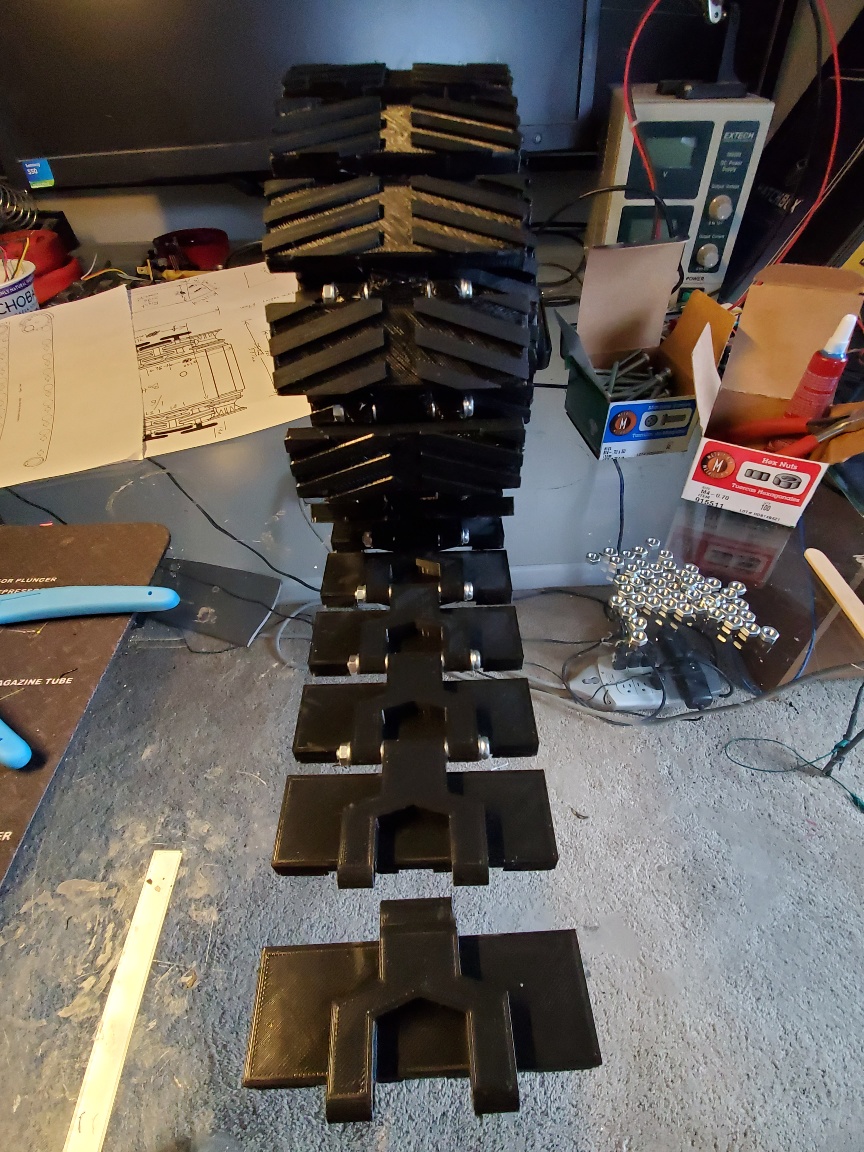 Transport tracks have been abandoned because of mechanical considerations, to be replaced with the wider combat tracks.

PVC tubing has also been abandoned in lieu of 3D printed spacers. Even though I used a miter box to cut the PVC tubing, not one spacer turned out with parallel ends. As Van Helsing said, "we learn from failure, not from success". 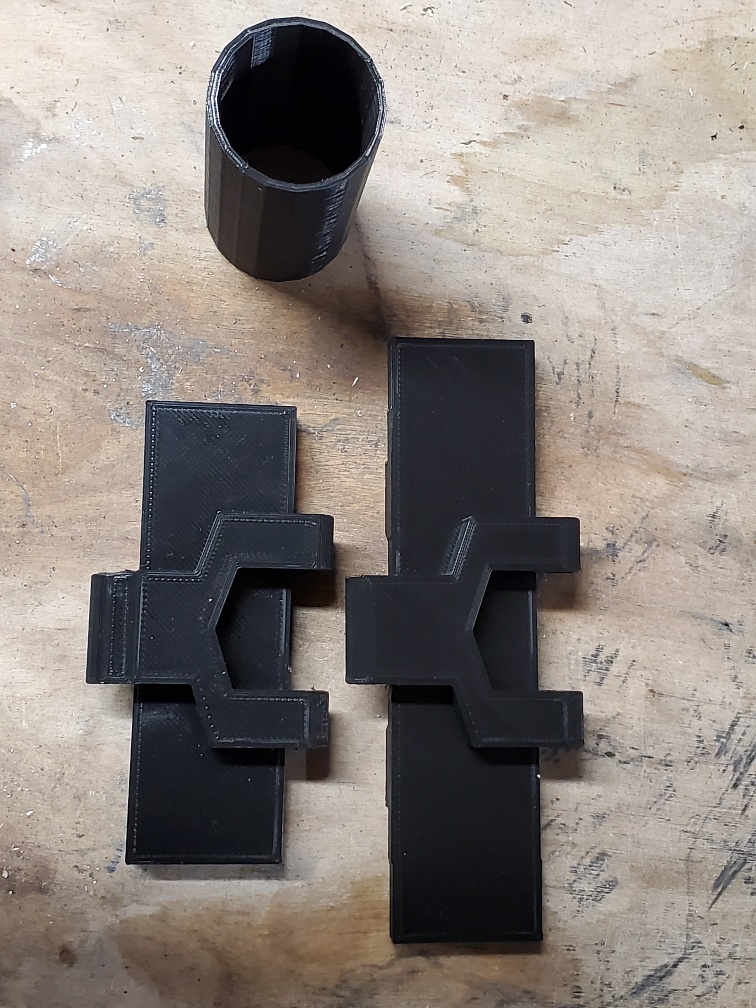 Also prototyped the first drive gear assembly. Not quite "to scale" (my drive gear has 11 teeth, the real thing had 18), but one has to be practical at times. The teeth look out of line in the photo because they are. The top gear has yet to be permanently attached to the spacer. 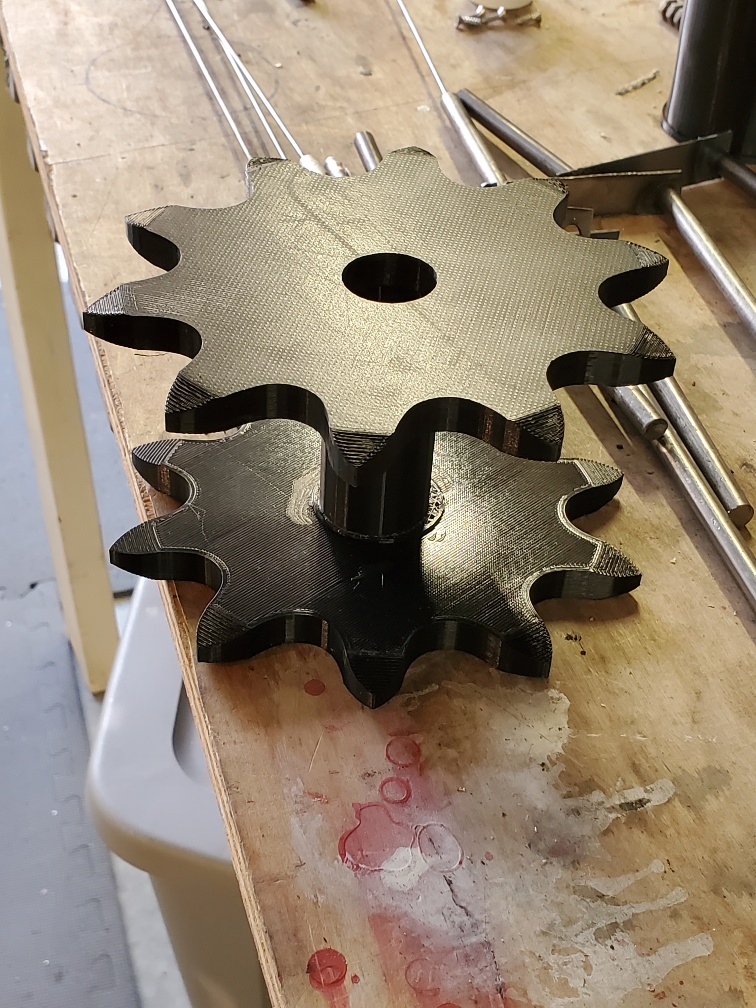 The box on the left contains self-lubricating bushings that are an essential part of the suspension system. 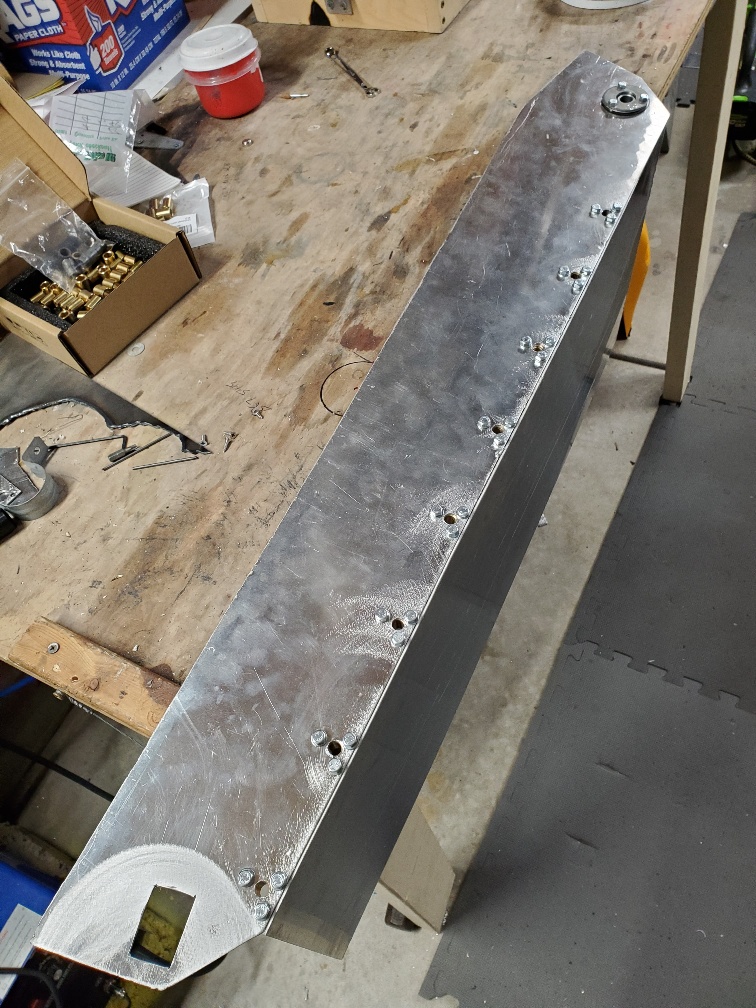 The drive sprocket and road wheel spacers have been abandoned due to problems with keeping the wheels parallel. Seventy-five mm screws and bolts will be used to allow fine adjustment so the road wheels don't rub each other (photo not yet available).

The last several days have been devoted to design and production of small, yet important, parts. Below (clockwise from upper right) main drive sprocket prototype, torsion bar plug and socket, main drive shaft bearing support, and the rear axle tensioner. These will all make a lot more sense when they are shown mounted.

Since this photo was taken, the main drive sprocket has been completly redesigned. 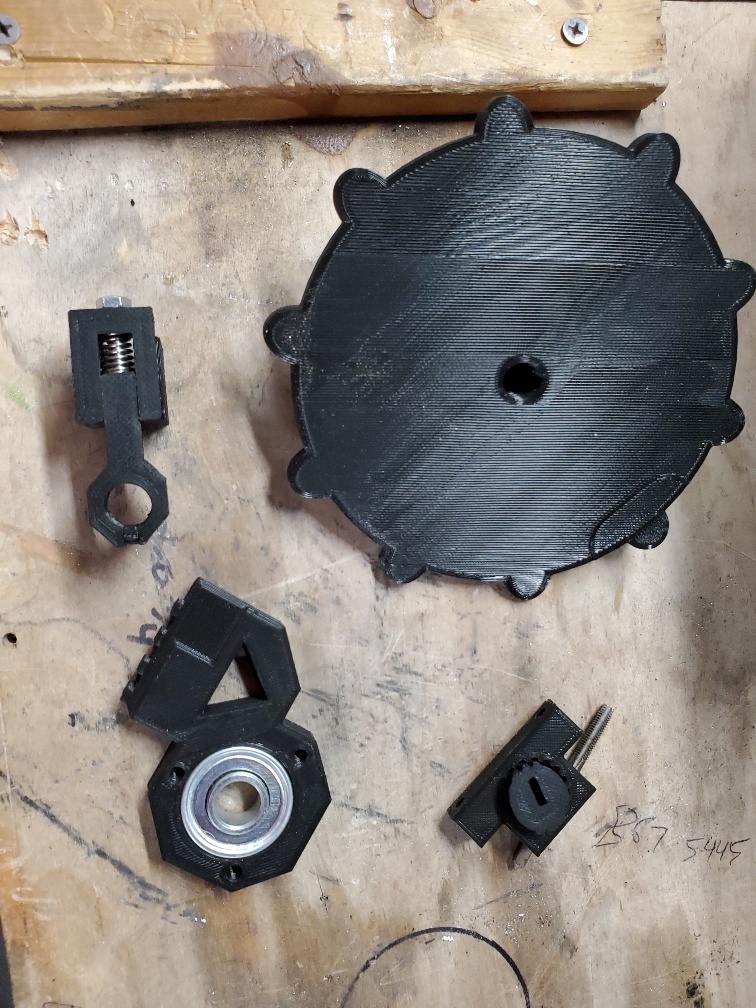 Below are the torsion bar socket and plug. The end of the torsion bar fits into the slot in the plug (lower left). The plug is then inserted into the socket (which will be bolted to the hull floor). To align the road wheels, it's only necessary to insert the plug into the socket at whatever position gives the best alignment. The real tank used a similar system, the main differences being that the socket was bolted to the side of the hull, and they had many more ribs on the socket/plug arrangement which allowed adjustment to sub-degree accuracy.

UPDATE...the below plug/socket assembly has proved to be unsatisfactory. A new design is in the works and will be posted below when complete.

The tap isn't part of the assembly, it's just there to hold up the socket for the photo. 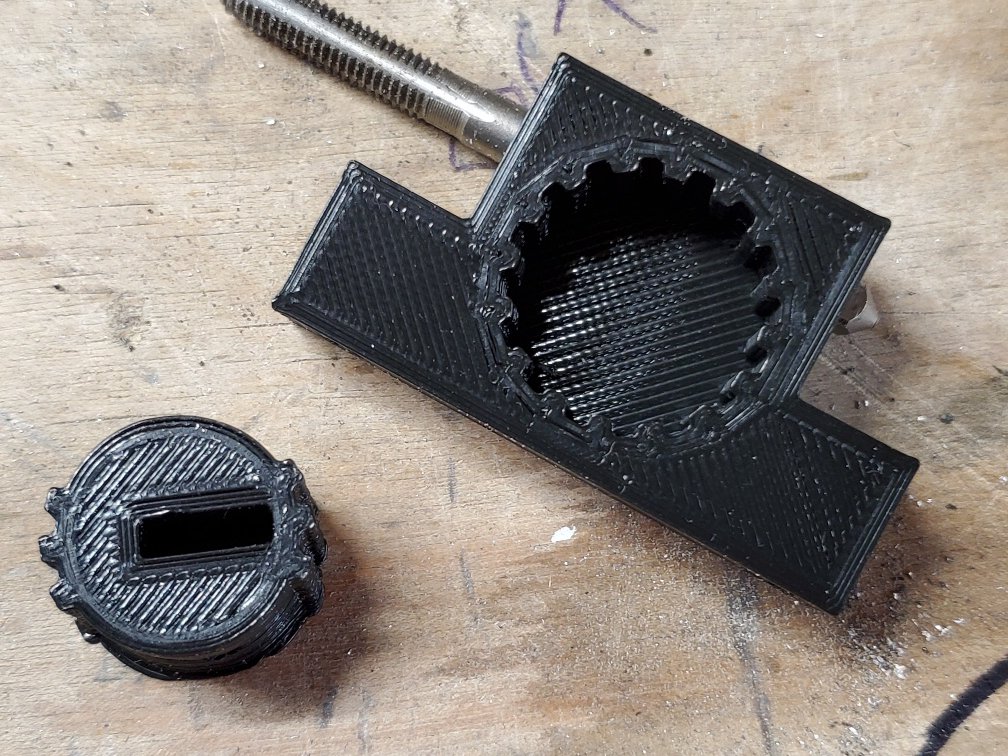 Of course, not being able to fit into the tank myself it needs to be controlled by radio signals. The below photo shows my home built transmitter.

From top to bottom...the on/off switch is at the top right. The next two button switches control the turrent rotation (either right or left). The large button in the middle is actually a multi-position button. Pushing on it down and forward will move the tank forward, down and right will turn the tank right, and so on. Below that control there is a push button mounted vertically (red) and one mounted horizontally (red body with a black push). In order to fire the main gun, the red button must be pushed down, then the black button must be pushed in. This is a safety measure to prevent accidentally firing the main gun. 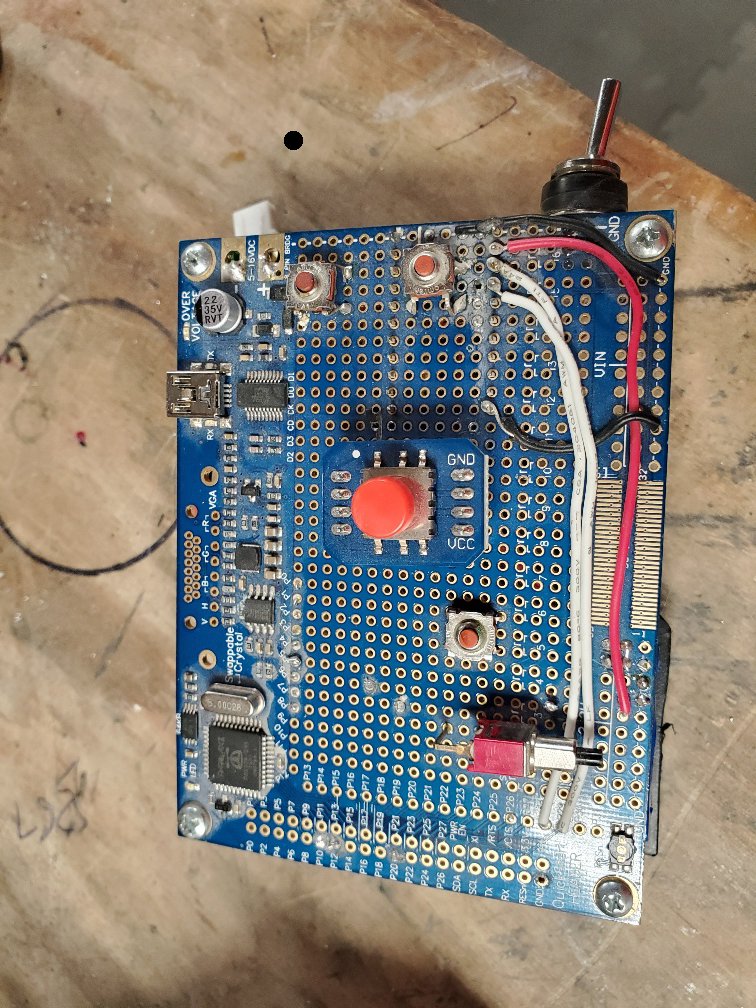 While it is possible to 3D print gears, I just don't think plastic against metal, especially metal in motion, is a good idea. I ordered drivetrain gears several weeks ago. Some of them were sorced from China and never made it. So after getting a refund and reordering, things are starting to arrive. The drive gear can be seen attached to the business end of the motor. Above that is the drive chain tensioner with a plastic prototype gear. To the right is a swing arm alignment bushing sitting in its pillow block. at the bottom is a bag of #20 roller chain. 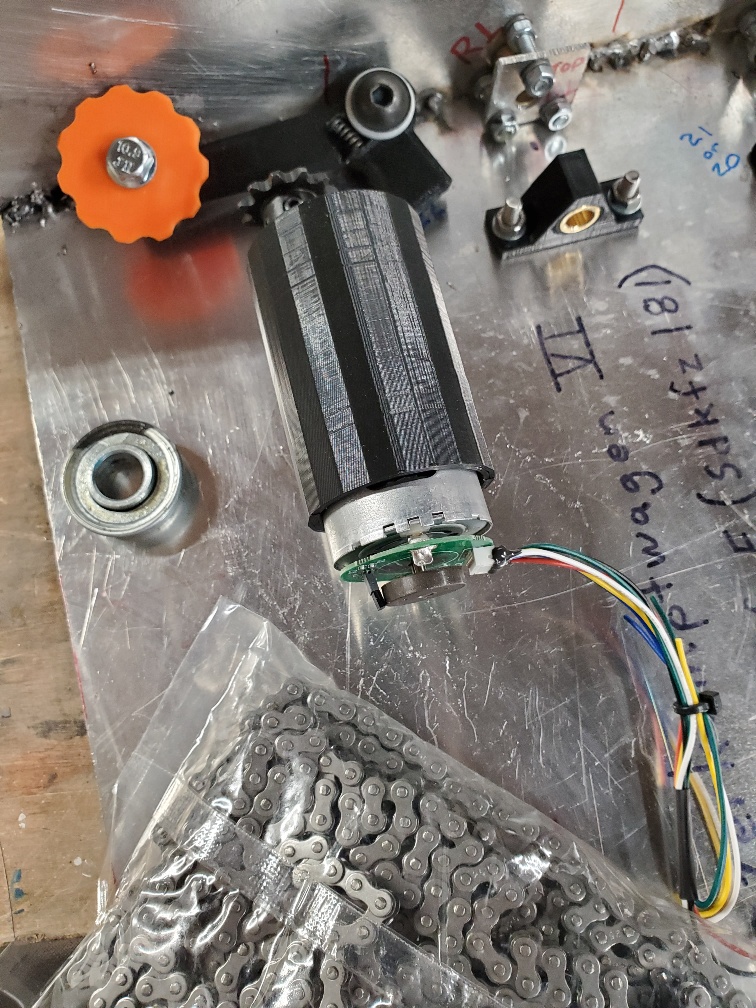 I also had a chance to weld the lower glacias plates onto the hull. Now assembly and testing of the drive train can begin. 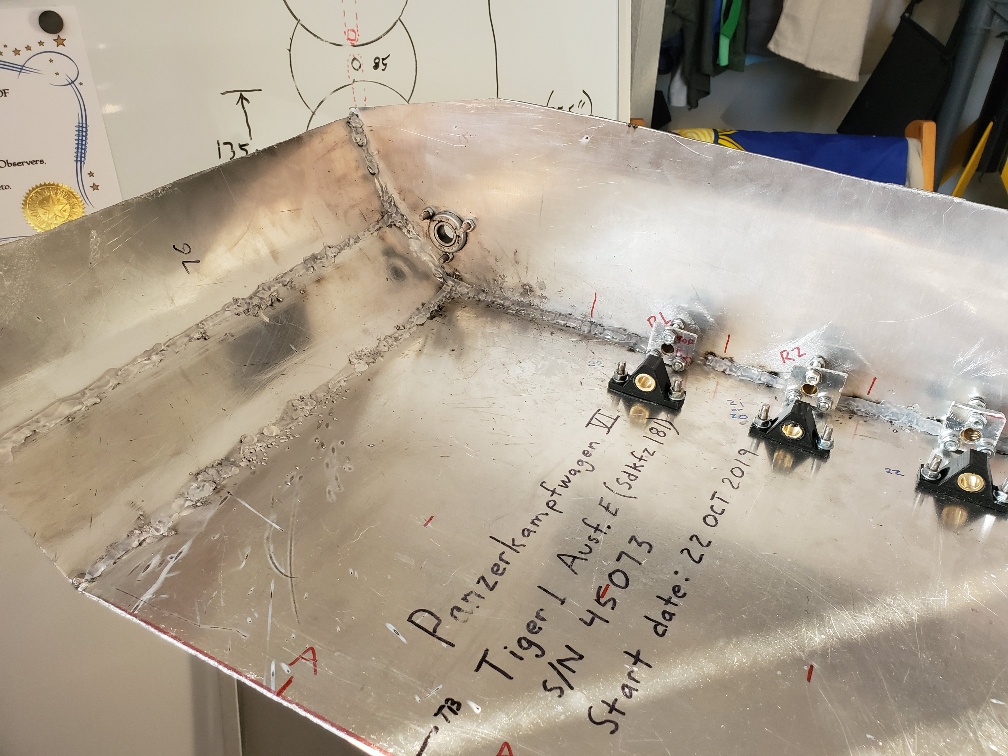 The axles have to be cut down and capped and still more work to do on the interior part of the drivetrain. At the top of the picture can be seen the sockets and plugs where the torsion bars attache to the left side of the tub. The orange track is for speed calibration.

Questions/comments, E-mail me at john at theastroimager dot com